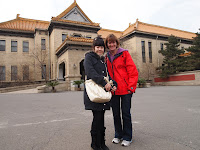 Dennis, a lovely tiny little Chinese student, first helped me to check into my hotel.  Then we headed off by taxi to Puyi's Palace. Poor Puyi, who was rather hopeless, was the last emperor of China. Puyi means puppet, and I think this was his official title, as he had to report to the Japanese.

The palace was interesting as it was set up as he would have lived in the Forbidden City with his four wives.    Not all four at the same time. Anyway poor Puyi didn't seem to do too well in the bedroom so his first wife, the empress, found a new lover. When she was discovered, she was restricted to her rooms, got addicted to opium through boredom and went a bit mad. Apparently she was offered a divorce, but she didn't take up the option. He married the second wife at the same time as the first.

The third wife was a student from Beijing. Apparently she was well-behaved for a while, but then got politically active, and died in suspicious circumstances. His last wife was a nurse, which was a good idea because this guy was a total hypochondriac. He consulted his doctor at least once a day.

There were lots of amusing stories - the fact that he used to spend hours on the toilet hiding from the Japanese, and that he tried to escape from the palace in his huge Bentley. Of course, no-one would have noticed the Bentley as all the peasants had one in those days!!