I had a great time in China and it was nearly time to return home. Although I was sad to be leaving Leon, I was looking forward to some home comforts. Like a reasonable mattress. One that is so hard that it gives you sore hips is not my idea of bliss. And maybe London isn't quite as dirty and polluted as I had previously thought!

I've included a few additional photos of memorable moments during the trip.


We had some good l 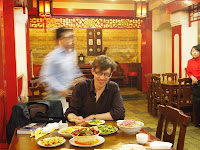 ocal food at this restaurant. The waiter rushing behind Leon was carrying a live fish obviously for inspection by a patron. As he walked past Leon, the fish leapt out of his hand, nearly on Leon's lap, and landed gasping on the floor. The waiter barely hesitated, scoped it up and continued on his way!


These photos are of the view from the Hyatt Hotel in Beijing. The cocktails were a cheap price to pay to watch the sun go down over Beijing. 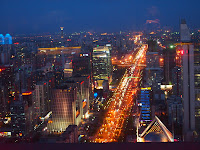 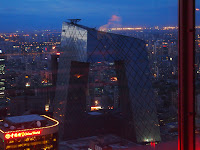 We had to reluctantly catch one of these 'tuk-tuks' home one night. The last train sto 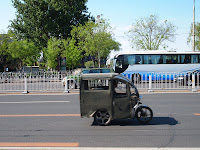 pped earlier than expected, and all the taxis were taken very quickly. It was an interesting experience, skidding from pothole to pothole!

I really did have a good time, and am looking forward to my next visit. It definitely gets easier as Leon's Mandarin improves.
Posted by Sue at 10:41