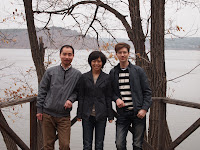 Stella and her husband came and collected Leon and I for a day out. Included on the iterinary was a visit to Jingyuetan National Park - it is the largest artificial forest in Asia! There is a large lake in the middle and visits seem to consist of either driving or walking around the lake on the road. There were very few footpaths off into the forest. The main purpose of visiting this park is to inhale the 'natural oxygen'. There was a total fire ban at the time, and there were quite a few soldiers patrolling to ensure that this was enforced. Apparently on total fire ban days a text message is sent to all mobile phones in the area. Quite a cool idea!

We then headed off to Stella's parents apartment. This seemed typical of most apartments. We took our shoes off at the door, and were given slippers to wear. It had a 'sun room' where the laundry is dried, but also large containers of water in the bathroom. Apparently the water can be turned off unexpectedly and so reserves are kept at all times! And once again, no heating. Heating is controlled centrally and turned on and off when the government decides winter has started or ended. We had fun making 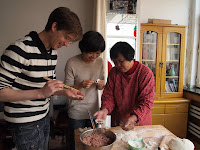 dumplings, although none of us were as good as Stella's mum. It felt like we made hundreds and I was surprised that we managed to eat nearly all of them. Neither of Stella's parents could speak English, although this didn't stop them from making us feel very welcome. Stella's Dad would occasionally break into Japanese. He said this stopped him from feeling left out whilst we were speaking a foreign language!! He could play various musical instruments and gave us an impromptu concert.

After gorging ourselves on dumplings, together with a salad of wild garlic and dandelion roots, we headed off to visit Stella's grandparents. They had lived on their farm for most of their lives and the farming was be 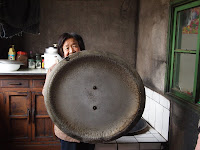 ing continued by two of their sons. Again we were made to feel very welcome and lack of English wasn't a problem. Living conditions were very basic - one large room with a raised platform, under which a fire could be lit. So for once, it was lovely and warm in their house! Stella said her grandparents didn't see the need for furniture and were very 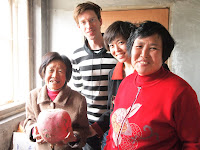 happy living in the traditional style. The kitchen had the largest wok I had ever seen, set into the stove top. Grandma also proudly showed me the small radish she had grown.
Posted by Sue at 08:48