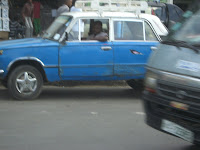 Addis was exactly what I expected. A dirty, bustling, chaotic African city. I saw a number of trafffic lights, only one of which actually worked. There were almost no line markings, and I'm not sure how the traffic managed to move along without becoming hopelessly snarled up, but it did manage to do so.

These dilapidated blue taxis were everywhere. And of course, there were also very smart cars, but these were in the minority. We had lunch at a local restaurant and was introduced to injera. It was served with kitfo which is minced beef, usually served raw,  but none of us was game to try this on our first day! We had our kitfo cooked, and I am sure the locals were horrified. 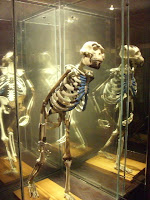 The National Museum of Ethiopia has a replica of Lucy on display. It was fascinating, but I supposed I was disappointed that it wasn't the original. Even older than Lucy was a fossilised baby. It looked much cuter, but just like a chimpanzee! 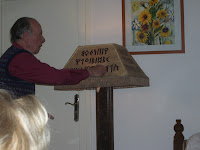 That evening we were lucky enough to be invited to Richard Pankhurst's house. Richard who must be in his 80's, has lived most of his life in Ethiopia and is a renowned historian. Although his talk was fascinating, we found it difficult to concentrate as we were so exhausted. We might have been a more intelligent audience if we had had this talk at the end of our trip, and after some sleep!

We spent the night at the Sheraton - which was a smart hotel. Not sure how many stars, but this was the only taste of luxury that we would have the entire trip! The hotel was gearing up for the Pan African Parliament which is based in Addis. Apparently Gaddafi had wanted to move the Parliament to Tripoli and for many years supported a campaign of terror and disruption to prove that Addis was too unsafe for the Parliament. It makes you realise how little we really know about what happens elsewhere!
Posted by Sue at 02:57