Our last day in Ethiopia!  We had lots to do starting with a visit to the Ethnological Museum currently housed in the former Haile Selaasie's palace.

I was fascinated by a display which explained the different uses for various trees found in Ethiopia.  I've given two examples below:
Desert date, used for firewood, charcoal, kills bilharzia.  The bark is used to cure elephantitis, stomach aches, yellow fever and syphilis.   The kernels produce an oil that can be used as soap and cures rheumatism.
Hog plum, obviously this provides fruit.  The wood is used for fences and windbreaks.  The seeds used for oil, and soap.  Good for skin cuts, ear piercing and bone surgery.  The flower and roots can be crushed and used for gastric problems. 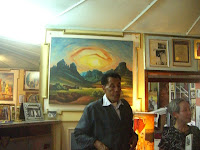 We were lucky enough to be invited to the artist's studio of Afewerk Tekle.  Now in his early 80's he is still one of Ethiopia's leading artists.   Quite a character, he had many tales to tell of his life and the many changes he had seen in Ethiopia.   He had been very close to Haile Selaasie, and it was obvious that this had disadvantages as well as advantages. 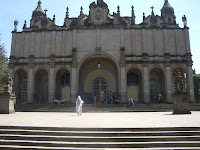 If his tales were true, and not coloured by an old man's memory, then he was indeed a courageous and outspoken man, not only in words, but also through his work.   His work is bright, colourful and full of symbolism, speaking out on the problems that face Africa.   We saw one of paintings in Trinity church in Addis, which shows the defeat of the Italians. 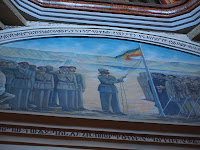 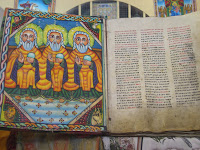 These beautiful parchments manuscripts continue to be produced.   Each new church requires their own set of Books. 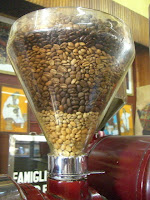 There was time for a final cup of coffee and then it was time to head off back home.