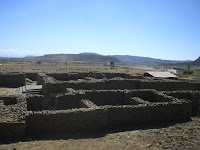 Axum used to be a thriving commercial civilisation trading with distant lands. It was the first country to produce coins, and even today long buried hordes of coins are
exposed by heavy downpours of rain. Axum's greatest significance as the epicentre of the Queen of Sheba's dynasty.

We saw the ruins of what purported to be her palace. 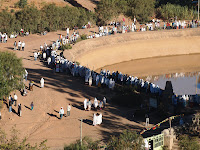 Her bath was visible from our hotel. As part of the Timkat festival which also celebrates the baptism of Jesus in the River Jordan, so baptism is an integral part of the festival. But sadly a young boy drowned in the baths and it was three days before they located his body. We thought it would be insensitive for us to be there.

Axum has these strange stele which are towering obelisks cared from single pieces of s
olid granite. How and why they were built remains a mystery. The tallest one still standing is over 23 meters high. It appears that sacrifices were made at the base. There are over 50 around Axum, but there are three that are ready accessible near Queen of Sheba's palace. It's thought that these date back to the 4th century AD. 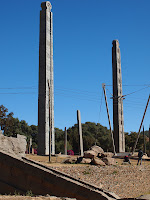 The stele shown that is unsupported was removed by the Italians and installed in Rome. After much negotiation it was finally returned to Axum but it had already been cut into three portions for transport purposes.    The stele shown in this next photo had fallen down at some stage.   We were very confused about how and where, until we realised that there was another stele nearby that had also fallen and only its base remained. 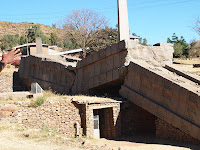 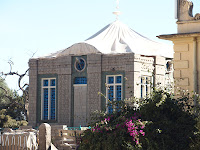 Axum is also where the 'real Ark of the Covenant' is held. No-one is allowed to view the Ark and its contents, other than the priest who is elected as caretaker. This priest is nominated by the Church Elders and the selection criteria is based on his religious knowledge and holiness. He can't be married or have dependants as he has to spend most of his time guarding the Ark.
It is thought that the son of the Queen of Sheba and King Solomon brought the tablets containing the 10 commandments to Ethiopia. These were first held in a monastery on Lake Tana, and then moved to Axum. The current church was built on the orders of Haile Selassie.