We caught a small plane from Addis Adaba to Bahir Dar. It was packed to the gills, not one empty seat. It left early. Once everyone was checked in and ready to go, they obviously saw no reason for hanging  around!   In fact, I think that every internal flight we were on left early. 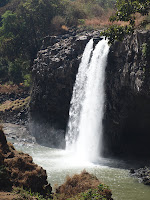 Bahir Dar is a city located on Lake Tana which is the source of the Blue Nile. The Blue Nile Falls are no longer the impressive display it once was. A dam, Tis Abay II, has been constructed upriver to provide  hydro-electricity. A wonder of the world has disappeared in the name of progress. Of course, damning the Blue Nile is one of the major reasons why relations between Ethiopia and Egypt are strained. We were told that Egypt's fears have resulted in support and funding for Eritreans in their arguments with Ethiopia.

But the drive to the Falls was interesting. We had to drive slowly through the outskirts of the town and it provided an opportunity to take photos of Ethiopians going about their daily lives. 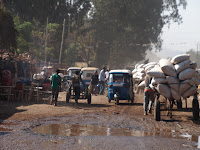 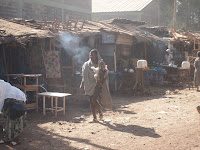 That afternoon we visited a local spice market. We had wanted to visit the Merkato market in Addis, but our guide had been too nervous. He was still nervous about the spice market and we had to promise not to take anything valuable, no money, only our cameras! 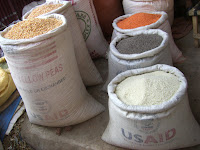 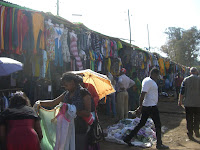 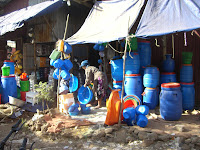 Please note the US Aid sacks - marked quite clearly not for sale!! 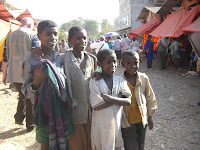 And as always there were children wanting to be photographed. Most of the time, they just wanted to see their image on the camera screen. 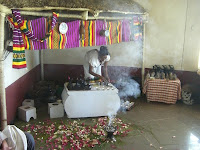 And once again we were offered delicious coffee.    The beans are freshly roasted and then brewed just for you - which obviously means that this can be a slow process.   No rushing in Ethiopia!