To be honest, I approached this trip with some trepidation. Ethiopia is not a known tourist destination and I hadn’t travelled with this particular travel group before. I had no idea what to expect. I needn’t have worried. From the very beginning, it was obvious that the trip had been meticulously planned and although there was a variety of personalities and ages, most of the group had travelled together previously and knew each quite well.

Before the trip, I had the usual media-induced impressions of Ethiopia - a drought-stricken country struggling with tribal factions and poverty. Now after the trip, I have a different vision, one of happy smiling faces, a nation of optimistic people trying to blend old traditions and new, hoping to survive and thrive in the 21st century. 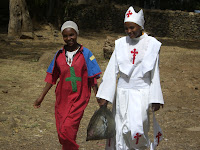 I had expected to see starving, malnourished children. Instead I saw smiling healthy children. Yes, they had snotty noses and flies everywhere, but their flesh was well rounded and they looked healthy and content. Their staple diet is ‘teff’ which is a grain with plenty of iron and fibre. Teff is used to make injera, a spongy sour flatbread, which is used to mop all sorts of dips and sauces. I thought it looked very unappetising, but maybe that just proves how spoilt I am! 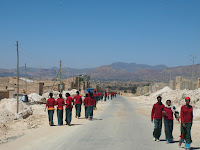 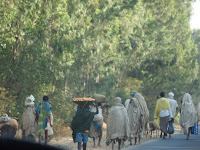 Ladies, dressed in spotless white with brightly coloured embroidered borders, were tall and elegant with the most beautiful posture - gliding over the most treacherous terrain. I saw them walking carrying water in brightly coloured plastic jerry cans, or large parcels of grain precariously balanced on their heads. And again there were always happy, smiling faces ready to greet us and prepared to have a conversation.


Even though they lived in what we would consider to be abject poverty – one room houses with no running water, no sewerage and very little electricity, they seemed content with their lot in life. I met a teacher whose walk to school took two hours each way every day. There is no train service and only dilapidated local buses. And most of the roads were dusty, with vicious potholes and large rocks. So people walk everywhere. Up and down the most treacherous of terrain. Whilst we felt very adventurous scrambling slowly up impossible looking slopes to visit remote churches, children and the elderly scampered up besides us, offering assistance and advice.


The Ethiopians were not afraid to show affection. Their happy friendly natures bubbled over into open displays of affection. We witnessed men greeting their friends by hugging and shoulder bumping. We even saw soldiers casually holding hands.

There is still a vast supply of arable land. Apparently it is easy to apply to the Government for a grant of land, and the children (even girls) can inherit this land, but generally speaking, it can’t be sold. Farming methods are still very basic, but Ethiopians are trying to move into the 21st century. There are trained development agents to demonstrate improved techniques to farmers. 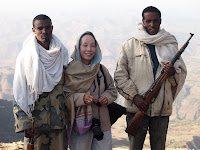 Health extension workers are trained local women who teach the basics of health, sanitation, family planning, and emphasise the importance of education. In the Simien Mountains the government was using a novel approach of employing former poachers as guards for the tourists. I’m not sure exactly who or what we were being protected against, but it was definitely an experience to be protected by an Ethiopian elder yielding a Kalashnikov that was at least 40 years old!!

Religion is an integral part of their daily lives. We saw churches perched precariously on mountain tops, caves that were churches and churches carved out of rock, most had been in continuous use for hundreds of years. Church services start at 3am and continue through to 9am. People attend as they are able to; not always for the whole service. Many men are part time priests, as the church doesn’t provide a living. Seniority and respect is obtained by learning, fulfilling religious duties and performing charitable acts. Almost every child we met wore a cross, tucked inside a scruffy t-shirt.

The Ethiopians believe that much of biblical history took part in Ethiopia. One such belief is that the Garden of Eden is located somewhere in Ethiopia. This is easy to believe as the scenery is stunning. We fast ran out of superlatives as each turn in the road revealed more incredible vistas of mountains, gorges and valleys. Sunsets and sunrises had to be seen to be believed. Church murals evidence that one of the three wise men was an Ethiopian. The ruins of the Queen of Sheba’s palace can be seen in Axum. Her son was responsible for bringing the Ark of the Covenant to Ethiopia. Every Christian Ethiopian firmly believes that the stone tablets containing the commandments written by Moses are held in a church at Axum, and celebrates the existence of the Ark by participating in the colourful annual Timkat epiphany festival. 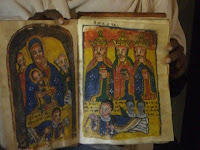 The amount of history we saw on display was astounding and yet there is still so much more to be discovered – tunnels and chambers underground known but not yet uncovered, treasures that are stored and archived but not yet on display. Ethiopia is a virtual treasure trove of historical artifacts.

It’s difficult to condense all that I experienced on this trip into a few short posts, but I hope that I have managed to convey not only the rich history of Ethiopia, but also the sense of optimism that they have regarding the future. For me, this was definitely the trip of a lifetime.