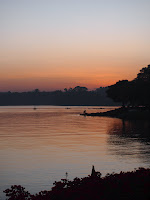 We got up early and headed off by boat to visit a couple of 20 monasteries that are sheltered on the 37 islands!
I still had jet lag so was up even earlier and managed to get a few shots of the sunrise over the lake. 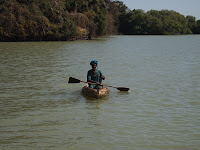 There were a couple of papyrus boats
out fishing and a guy on the point completing his morning ablutions. It was so incredibly beautiful and peaceful.
This picture of the papyrus boat was
taken later in the day, when I could get a bit closer. 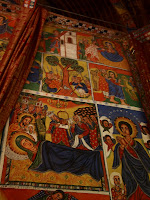 A number of the monasteries are only open to men. This is because the
monks don't want to be distracted by women!
That old religious tension between honouring Mary,
the mother of Jesus, and regarding Eva the temptress
as the root of all evil was very evident in murals painted on the walls of the monasteries. Our guide always referred to Eve as Eva. 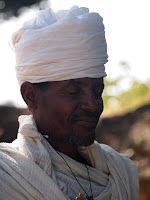 The first monastery we visited was Narga Sellassie founded in 1748 on Dek Island. This guy was the priest looking after the monastery and collecting payment from the visitors.

The monasteries are round - no beginning and no end. There are twelve doors representing the twelve apostles. All Ethiopian churches have an outer circle which is for prayers, an inner circle for communion and an inner sanctum where the copy of the Ark of the Covenant is kept. 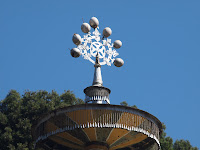 Only the monks can go into the inner sanctum. On the top of each monastery is a cross with seven ostrich eggs, representing the seven miracles of Jesus. The ostrich eggs are more traditional, but apparently these are now in short supply. 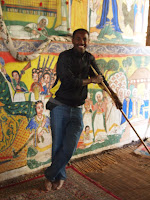 We also visited Beta Mariam which was unusual as it had a thatched roof. This is Kibrom, our guide, giving us instruction on the painting of the murals. 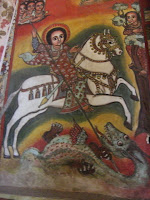 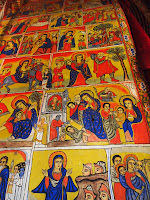 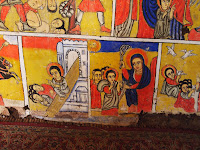 The colours were incredible. But the scenes were remarkably similar in all the churches. There was always a picture of St George and the dragon! An evil fish who started devouring churches was shown being speared by a saint. I like this painting which shows Jesus being beaten by his mother for misbehaving!!


These ancient manuscripts were kept in a little house next to the church. We kept encountering such marvellous artifacts and historical treasures kept in unbelievable conditions. It is so surprising that they have survived. 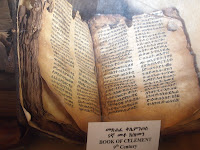 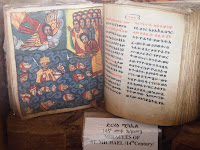