Gondar was Ethiopia's capital from 1636 to 1667.  There is a compound of 6 royal castles.
Emperor Fasilidas built the first castle and then his descendants vied with each other to each 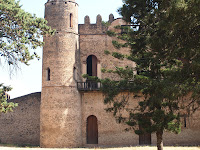 build their own castle, usually after knocking off the guy before them. One emperor was too young to build his own castle, so his mother built her own, and then he added his as soon as he was old enough! The castles weren't built as fortresses, but as displays of wealth and power. 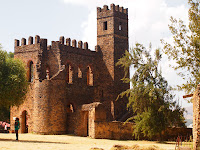 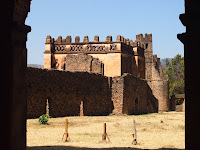 The Church of Debra Berhan Selassie in Gondar was unusual because it was rectangular. The ceiling was painted with over 80 wide-eyed angels, each face is different. But the colour range always remains the same - green, red, yellow and blue. 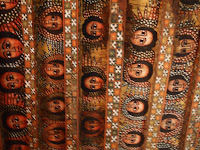 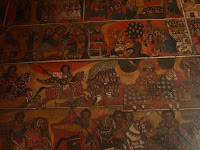 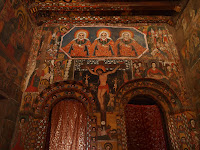 Gonder was full of tourists because the Timkat Festival was starting the next day, so we had to stay at the Capera Waliya Inn Hotel. This was the worst hotel of the trip. I slept in my sleeping bag insert, so was lucky enough to escape bed-bug bites. Judging from comments in the morning, I definitely had the best room in the hotel. I had lights, a toilet seat, and hot water, although the hot water was only in the basin, not in the shower which didn't work at all!