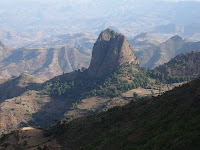 Even though we loved the Timkat Festival and thought it a privilege to have viewed it, we were very happy to be leaving our hotel and heading off to the Simien Mountains. We had a 4 hour drive, on terrible roads, but with breathtaking scenery.

There were more horses to be seen, as they coped better with the high altitude and were needed for transport.

We saw a Timkat festival taking place and stopped to take photos. Unfortunately we weren't well received. Some of the elders objected to our arrival as we were foreigners and therefore not Christians. 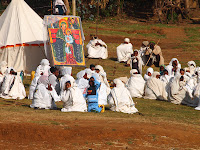 I could understand their annoyance as we certainly

disrupted proceedings. Children left the ceremony and surrounded us. We decided that it would be best 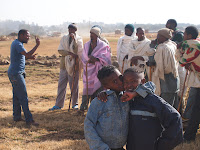 if we headed back to the bus.

But our guide decided to stay and explain to the elders that although we looked like infidels we were in fact Christians!
I hadn't realised I had captured the moment until later, when reviewing my photos.
We continued to see processions taking place as we continued on our way, but were now rather reluctant to leave the safety of our bus! 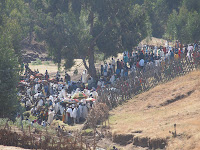 Whenever our bus happened to 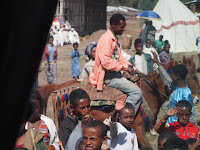 coincide with a procession, we were terribly disruptive.

As can be seen in this
photo, the children and young boys would flock to the bus.
Although everyone was friendly, waving and smiling, we didn't want to push our luck, and didn't get off the bus again.

We saw gelado baboons in the Simien National Park. These baboons were so used to tourists that they just ignored us. We gradually got braver and braver, until we were strolling amongst them taking photos. 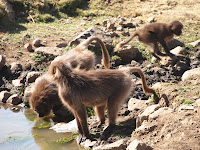 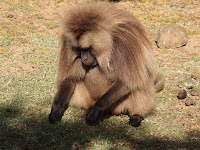 Our hotel that night was supposed to be the highest in Africa! It was clean, with plenty of hot water and lights that worked. I didn't care how high it was! But I had to admit the view was stupendous! And the stars at night were fantastic.http://www.simiens.com/ 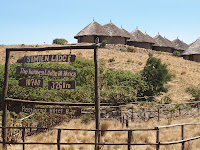 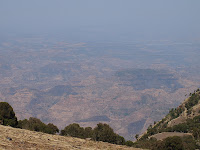