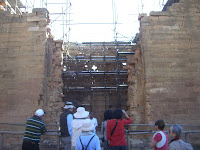 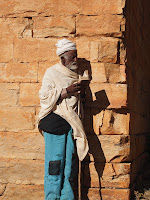 In the early morning we headed off once again. This time to Hawzen, but stopping on the way to see the Temple of Yeha which dates back to 700 BC.   The oldest standing structure in Ethiopia.   It survived as long as it did as it was changed from a temple to a church. 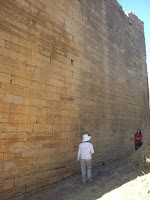 We continued on following a route which although the road was thankfully in good condition and tarmac for a change, continued to offer us spectacular views. But I am never happy, as the good road condition meant we went faster, and saw less, as we whizzed past people and villages. 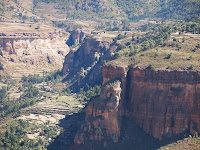 This is the Bizart valley. We stopped to take photos and were overwhelmed with the smell of wild sage. 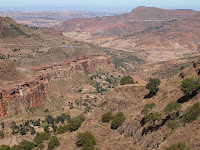 Whenever we stopped, children would appear from nowhere.  Almost as if they had been hiding in the bushes!   This could be rather embarrassing if we were planning a 'loo' stop and we definitely needed our guide to ensure that we weren't followed.

We spent the night at Gerhalta Lodge, which felt very luxurious to us. It was owned by an Italian, which meant our requirements were understood, but also meant that the main ingredient for most of our meals was pasta! A delicious change from injera.  As many ingredients as possible were grown organically at the lodge.http://www.gheraltalodgetigrai.com/

Some of us managed the strenuous climb up the mountain side to view Mariam Kokore and Daniel Korkore, two ancient rock churches.  Most of the group gave up half-way and only four of us continued to the top, up what seemed to be sheer cliffs. I hope these photos give you some feeling of how high up I thought I was. 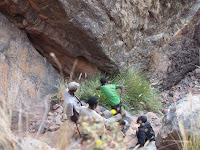 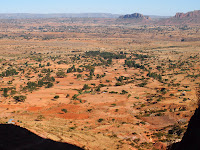 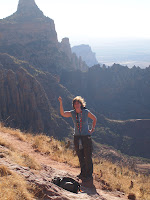 Whilst we struggled along, children and guides scampered up next to us,
offering help and assistance.  The climb itself wasn't that difficult, but the concern was getting back down. However, with the help of the guides it was far less difficult than we feared.

I was nervous that we wouldn't make it back down before sunset, but in fact down took much less time than going up.

This is me, celebrating reaching the top! 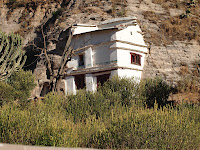 The first church we reached was Mariam Kokore approximately 600 AD.  It's one of the most complex and biggest rock churches of its kind, with carved columns and arches. 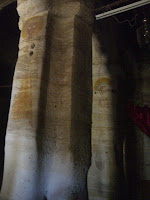 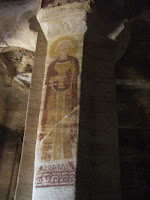 The second church Daniel Kokore was even older approximately 500 AD which we reached after walking along a narrow ledge.   It had a very narrow opening into the church, that we really had to squeeze through. 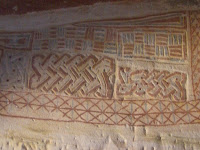 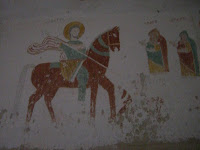 It was very dark inside.  There were two chambers.  As you can see the murals looked much older. 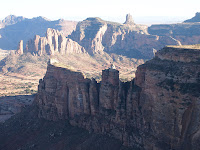 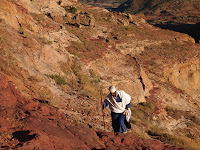 The view was enough to make the climb worthwhile!

The priest had been away during our visit, and we met him on the way back. He didn't seem to have the same difficulties that we had in making the climb!   We gave him a small donation for the church.  His gratitude was overwhelming and humbling.