Sometimes the line between past and present blurs, yesterday feels like today and it is possible to believe that you are living in the pages of the Old Testament.  This was my experience, high on a mountain in northern Ethiopia.

It’s over 2,000 years since the Ethiopian Orthodox Church was founded, but many of its traditions have remained unchanged.  There are more than 12,000 churches of differing shapes and sizes throughout Ethiopia.  But our small group of travelers was headed for two remote churches near the town of Hawzen in Tigrai. Our bus dropped us off at the bottom of a mountain. This wasn’t gentle undulating countryside. There were huge cliffs, ridges and tors bursting up out of the ground.  We started to climb, clambering over rocks and scrambling up a narrow gully.  It didn’t seem that difficult so our confidence grew.

We had lots of helpers: the hired guides plus a crew of children who appeared from nowhere. Some were meant to be tending goats and donkeys, but they refused to return to such ordinary tasks whilst there were the foreigners to check out!
We reached the top of the gully to be greeted by another fantastic view - and a sheer rock face!  We stared at the cliff in dismay. There didn’t seem to be any hand or foot holds.

However, there was lots of advice from both official and unofficial guides!   I can’t remember the detail of that climb, but I can clearly recall the sense of exhilaration as I high-fived my guide at the top!

We had a well-earnt rest in the shade of a small cave blackened with smoke, a shelter for shepherds and travelers. Here, some of the group reluctantly decided that they had had enough. That left four determined to continue.

Up the mountain side we continued, pausing every now and again to catch our breath and gaze, awestruck at the view. Ethiopians believe that the Garden of Eden was located in their country, and I had no difficulty believing it to be somewhere nearby. The vistas stretched for miles and miles to a distant shimmering blue horizon.
The rest of the track was a steady climb, some parts were difficult because of loose stones and gravel, at other times the path was so narrow that you had to watch every step. Then around a bend and finally ahead, there was our goal! The first church, clinging to the rock face: Mariam Kokore. Built in approximately 600AD, Mariam is one of the largest and most complex rock cave churches in Ethiopia. 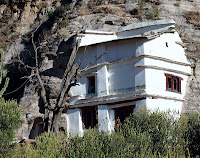 The facade of the church appears to be a later addition, whereas inside was clearly a hollowed-out cave.  We stumbled over the uneven rock floor using our torches to peer at the intricately carved columns, arches of rock, and ancient painted murals.

Daniel Kokore, the second church, was a further careful walk along a narrow ledge. This was an even older church. We squeezed through a narrow doorway to see more ancient murals. The tiny church could barely hold the four of us. As remote and isolated as these churches are, they have been in continuous use since the day they were built, if built is the right word. They chose the location over 1,500 years ago to ensure isolation, so I was concerned that we were unwelcome intrusions. These priests wanted to focus on their faith without distraction. Surely tourists would be unwelcome.  Luckily the priest wasn’t at home, being away on church business. 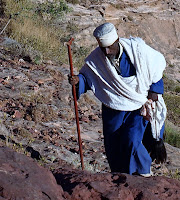 About halfway down the mountainside, we did meet him on his way back. We clasped hands and exchanged greetings. Salem, peace be with you. He had an air of tranquility, and far from resenting our presence, appeared genuinely pleased to see us. We didn’t have a common language, but there was no mistaking his gratitude for our small contribution towards the upkeep of the church. I felt humbled in the presence of this man, someone who was not interested in material wealth, but sought spiritual gold.  A humble man, content to be living in solitude, close to his God, seeking enlightment in a stunningly beautiful part of the world.
Posted by Sue at 02:04