Has the Ark of the Covenant survived thousands of years? Does it rest in a church in Axum Ethiopia? The Ethiopians believe so. The son of King Solomon and the Queen of Sheba, Emperor Manikil of Ethiopia, stole the Ark from his father after their first meeting! King Solomon forgave the theft and made a gift of the Ark, healing the rift between father and son. And the Ark remained in Ethiopia ever since.

Ethiopia is the most populous, landlocked nation in the world and the oldest known site recording human existence. It was the first major empire to convert to Christianity, and religion continues to play an important role in the daily lives of Ethiopians. Every one of the thousands of churches spread throughout Ethiopia has a tabot, a replica of the Ark of the Covenant, the sacred container for the Ten Commandments.

The existence of the Ark is celebrated each year as part of the Timkat Festival. In January 2012 I was fortunate enough to witness this epiphany celebration.

We were in Gonder, a city of ancient palaces. Our guide had found us a viewing point on a hotel balcony. Up four flights of steep steps, it was an excellent stakeout, but just too removed from the real action! Two of us left the tour group and headed back into the fray. It was early, but the town was already buzzing with excitement. We made our way through the crowds, weaving and side stepping, trying to find another vantage point. We headed for the town square which had broad steps on one side leading to a hotel. We found the steps already packed with tourists, but somehow we managed to wedge ourselves in. We had a splendid view: straight across the square and down the main street!

Everyone was dressed in their Sunday best. The sun seemed even more dazzling as it reflected off spotless white dresses and robes. There was dust, there was noise, there was heat, and it was so exciting!  A plane circled overhead, around and around, disgorging pamphlets and reeds. Catching one of these heavenly gifts guaranteed good luck for the following year.

The procession was starting! We could see it coming down the main street. Groups of young men led the way, chanting, stamping and flourishing sticks. Very warrior-like, but I felt safe on the steps. Gleaming horses followed embellished with tassels and pom‑poms. Large floats trundled along, a castle and a church, decorated with enormous crosses and religious paintings. Choirs flowed past in waves of red, yellow and green, the national colors of Ethiopia.  We were overwhelmed by music as everyone joined in singing hymns, swaying and clapping. 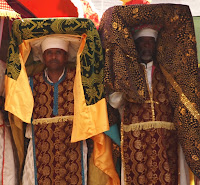 Then the highlight, the church clergy: priests, deacons and bishops. They were dressed in richly colored ceremonial robes, bearing large processional crosses of gold and silver. Some had bright sparkling parasols. Others had square canopies balanced over their heads covered with rich materials.

Only later did we realize that these square canopies were tabots, the replica Arks of the Covenant.

Then more choirs, more singing, and more dancing. But the end of the procession was in sight, and it was time to move. We decided to join the flow of happy spectators on their way to the baptism pool. Once again, we weaved our way through the crowd following the procession. The people were relaxed, but tightly packed. We found it difficult to make our way, so chose gaps wherever we could whilst concentrating on staying together. Suddenly, somehow, we had joined the procession!  We were on the wrong side of the barrier, separated from the spectators! Embarrassed, I apologized profusely to all around me. But as there was nowhere else to go, the only polite option was to join in. I tried to hide the fact that I couldn’t sing by smiling broadly, clapping loudly and dancing vigorously. I like to think my efforts were appreciated!  Finally, exhausted, we threaded our way to the other side of the road, leaving the procession and meeting up with the other members of our group.

We were all hot, tired and dusty, but exhilarated from our religious experience!
Posted by Sue at 01:55