This is a recap of some of the information I managed to gather during my recent trip to the DPRK on the basics of life: accommodation, work and food. 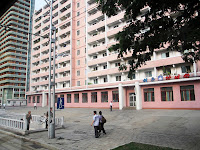 I asked whether everyone worked for the government, and was told that this was definitely not the case: some people did work for the government, but others worked for the State, and most farmers worked on co-operatives, and then of course there was the military!   The majority of people are paid a wage and  required to pay for food and accommodation.  Wages differ according to the responsibility and seniority of their position.   Farmers on co-operatives are paid with produce, according to how many hours they worked and their productivity.    This produce is sold at farmer's markets, and we did see people selling produce by the side of the road.   Co-operatives are being phased out in favour of state owned farms where the farmer will earn a wage.   Everyone in North Korea has to help with harvesting and planting in the autumn and spring.  There are very few exceptions to this rule.

There is no unemployment in North Korea and there are no jobs unfilled.  On completion of their education or military service, then each person applies to the Worker's Committee for a job.  The Committee allocates what it deems to be an appropriate job after assessing qualifications and accompanying reports.   Factories, farms and other organisations notify the Worker's Committee of vacancies.

Women are not encouraged to stay at home and look after the children.   Child care is provided free of charge, and women should return to work to repay their education.  However, working hours are reduced for women with larger families, and physical labour is reduced for mothers with children under 2 years.   Mothers receive 5 months paid maternity leave, 2 months before the birth and 3 months afterwards.   Babies are usually born in hospitals and not at home.

Healthcare has been free since 1953.   The emphasis is on preventative medicine.  General practitioners located in district clinics are responsible for the health of the people in that district.  A health card is made up at birth and the doctor will check regularly to ensure that everyone on his/her patient list remains healthy.  Of course, a daily dose of kimchi is better than an apple a day to prevent any illnesses.  We were told that kimchi is a known cure for everything from HIV to SARS.  Anyway, there are no infectious diseases in the DPRK as a result of strict quarantine laws!   Doctors often combine Western and Korean medicine, although these are taught at separate faculties.   The doctors refer patients onto specialists as and when needed, but if a person wants elective surgery, then an application has to be made to the Worker's Committee.

They are proud of the fact that there is gender equality in the DPRK,  But scratch the surface and it seems that there are still sexist attitudes.   80% of the men smoke, but women don't smoke.   The legal drinking age for men is 18 and is 17 for women, but women don't drink.   This is because it is socially unacceptable for women to either drink or smoke.   There might be legal equality, but obviously the social norms point to something rather different.  Divorce is extremely rare and socially unacceptable.

When children turn 14, they can join the Youth league and wear a lapel pin with a portrait of Kim Il Sung.  These pins are not for sale and are highly treasured.  There is always an organisation to belong to - no-one is left out.  There is a federation of workers, a federation of peasants, etc.  The most prestigious is the Worker's Party of Korea, but not everyone can join.  Three references are required that provide evidence of past commitment and dedication.  It is apparent that there is enormous pressure on people to conform, both subtle and more obvious.

In the past, marriages were arranged by parents when the children were aged between 8 to 15.   This, apparently,  is no longer the case. Although the parents do fix the engagement date and the date for the wedding, and the bride's family have the first wedding party at their house, and the second wedding party is at the groom's house, so it seems fairly unlikely that any wedding will take place without the parents' agreement.   There is no celebrant required at the wedding.  It needs to be registered within one month of the event with two witnesses.  One for the bride and one for the groom.  Each witness is usually a member of the committee who can verify identity and residency.  More subtle control! 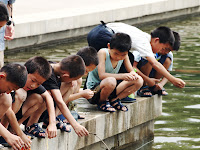 Very few people have pets.  Apparently Korean people don't like pets.  I think in their circumstances, a pet would be a real luxury.  We did see very few dogs running around in the countryside and heard a couple barking at night in Pyongyang.  I asked about birds, but the idea of keeping birds as pets seemed strange to them.  They obviously liked flowers, as there quite a few pots of flowering plants on balconies. They looked like geraniums - I don't think they were flowering vegetables!

Water and electricity struck me as two big issues facing ordinary North Koreans.  I saw groups of people collecting water in buckets and containers from storm water drains in Pyongyang.  It wasn't clear what they were going to do with the water and it may have been for watering the plants, bushes and grasses they were busily planting along the roadsides.   In other cities and towns outside Pyongyang, however,  people were washing their clothes and themselves in the rivers and canals. The power outages that we experienced were obviously quite normal, and we were shown a propaganda movie promoting the building of more dams to provide electricity.

Food - well this was a more difficult issue to address directly.   There were local shops in Pyongyang that looked well stocked.  Refrigeration was obviously a problem so most food in the shops was dried.  The fridges were reserved for drinks and we were always able to get cold water.  I was told that people ate three meals a day, with meat at least three times a week.  People ate out regularly at restaurants and there seemed to be plenty of these.   We were told that food cards were issued, but not to everyone.  Under what circumstances a person qualified for a food card was unclear.