Article - My impressions of the DPRK 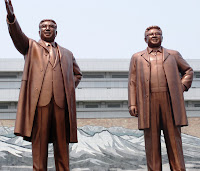 The guide leaned towards me: 'Do you know why our ginseng is the best in the world?'  I shook my head.  'It is just a little bit radio active!'   I could only be in North Korea, the DPRK.   Was he joking?   I don't know and I didn't ask.   Being in North Korea was like being in the pages of a fairy tale.  Perhaps Alice in Wonderland?   I had already spent the previous night feeling like the princess and the pea, on top of 10 duvets trying to soften the hard mattress on the floor.

When you land in the DPRK you land in another world.   It's the same, but slightly different.  The edges are just a bit blurry, just a little bit off.  A parallel universe.  There's only one point of view here, well, actually there is only one point of view allowed here.   It was even difficult to explain a different point of view.   North Koreans have been indoctrinated since birth.  They have no knowledge of anything different.  What would I achieve by sowing confusion in the mind of an everyday citizen?

Everything is bigger and better than anywhere else in the world.  Aside from the radioactive ginseng, (apparently a little bit of radioactivity is good for you), their farming methods are better, the education system is better, their healthcare is better.   North Koreans invented gunpowder and were the first to use it in battle, they invented spoons and chopsticks, they invented a form of the printing press.  Their Leader devised a new  economic philosophy, which combines the best of communism, socialism and capitalism, but including his own individual touches, the Juche Ideology.

There is no doubt that life is tough in the DPRK.  But the average citizen seems content with their lot.  After all, this is all they know.  Of course, I am making these statements based one somewhat limited information:  what I saw, the few people I spoke to and the newspapers and articles I read whilst there and subsequently.

Everything is so controlled.  Even though the Juche philosophy states 'man is master of his own destiny', man had better not take this too literally.  It only applies if he is also working towards the betterment of the DPRK and his fellow citizens.  It is about the right thing for the right person at the right time.  Of course, we never saw, talked about or even mentioned what happened to the wrong person in the wrong place at the wrong time.

There are layers and layers of bureaucracy.  And each individual joins that bureaucracy at birth.  Every step along the way is documented and reported.  Each request for a job, a place to live or elective healthcare is accompanied by recommendations by superiors, reports on personality, evidence of compliance with the system, and willingness to perform above and beyond the call of duty.

It is a country of contradictions.  People are encouraged to learn and improve their education,  but have very little knowledge of what is really happening in the world around them. They are encouraged to be innovative to solve the difficulties caused by the policy of self-reliance, but are required to blindly follow 'Kim religion'.  They are encouraged to be intellectuals, but there appears to be little opportunity for intellectual debate.   They are encouraged to provide for their own retirement, but not given the means to do so.   It's a country that wants to be left alone, but doesn't want to be ignored.   Its citizens learn to hate and fear the rest of the world, but to love and honour their own regime.  And yet, although they were shy, they appeared friendly and interested in the 'foreigners.'


The country is unbelievably inwardly focused,  presumably a result of its isolation.  Its people believe they are the centre of the universe, and they project this belief onto the rest of the world.  In their minds, North Korea features prominently in all our decisions!  It makes for a very unbalanced and perverse point of view. And makes us appear irrational!  They also project their fear and distrust onto the rest of the world, so every humanitarian gesture is seen as weakness.

They live in the past, at the time of the Cold War, not realising that the world has changed.  China, Russia and the United States no longer need them as a buffer zone.  There is no understanding that these countries are now trading partners and need each other.  Russia is treated with contempt, 'the lazy bear', after it withdrew funding in 1990.  But China, who continues to provide support, is also treated with contempt.   There was no evidence of recognition, gratitude or even acknowledgement for the assistance China gave them in the Korean War, or for the aid that continues to flow across the border. 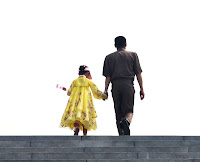 Re-unification is their greatest ambition and a driving force. But as they won't make any concessions, re-unification looks as unlikely today as it did 50 years ago.


These are people caught in a trap.  It doesn't matter who made this trap or why.  But it does matter that it should be released, with as little pain as possible, so that these people can rejoin the rest of the world and live their own lives.
Posted by Sue at 03:54