I was up early again in time for an early morning chat with one of our guides.   We talked about what we had seen yesterday, and then he leaned a little closer and asked: 'Do you know why Korean ginseng is the best in the world?'  I encouraged him to explain and he did: 'It is radioactive! Just a little bit is good for you.'  Was this a Kimjungilism? Was he serious?  I didn't take it further.

After another delicious breakfast of kimchi, we went to visit the oldest university in the world.   Yes, it is in North Korea.   Originally it was a Confucian university and now it is a museum celebrating the achievements of Korean ancestors.  Koreans were the first to invent gunpowder and to use it in battle.  They also invented chopsticks and spoons.   And the printing press using individual characters.   It did occur to me that Korea might have been part of China during the periods in question, or do Koreans just accept that they share ancestors with China?  Or maybe all Chinese descend from Koreans?   I didn't ask.   The people in this photo were being read articles from the newspaper.

Our next stop was the DMZ.   You will have seen this area numerous times on the news so I'm not going to add any photos.  We went through five check-points on the road.  We had to get out of our bus for the final check-point and walk in single file through the entrance point, and then back on the bus to the actual border.  It was tense.  We were told that unlike the tourists on the Southern side, we could wave and smile across the border.   No-one felt like doing so.  We weren't that sure about the North Korean sense of humour.  We were told that the North Koreans built the Signature Hall in 5 days.  The Americans thought it was a pre-fab building and tried to push it over.  There was a very faded UN flag on display which had been left behind after the signing ceremony.  We were told that the colour of the flag had changed over the years, but the feelings had not changed at all.  In the North Korean version of the axe murder incident soldiers were injured as a result of the provocation by US troops, but no-one died.   It seemed rather pointless and depressing, and so I was pleased to be back on the road to Pyongyang where we were due to visit the School children's Palace.   Not that I was pleased to be on the road again.  The roads are in a really bad way.  They have impressive looking 4 and 10 lane highways, and you bounce around like a ride on a roller-coaster.  Our coach driver was really little, and I often thought that he would bounce right out of his seat!! 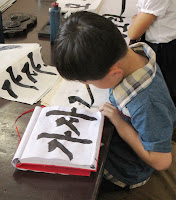 In 1975 legislation was passed making it compulsory to complete 11 years of schooling.   There are nurseries and kindergartens in every district.  Children are collected daily or weekly, as some children live in dormitories during the week.  Education is free, but children are required to purchase books which are available at a discount. All schools are co-ed.   Everyone can go to university, provided they pass the entrance exam, or they go to the army.   We were told that joining the army is voluntary!  But my impression was more that the timing of joining the army was voluntary, not the actual going itself.   Some go the army before university and some go afterwards.  The factories and farms also have colleges, and there are correspondence courses available.  This is to ensure that everyone at all levels has the same opportunities to progress, but also highlights the pressure to continue with education. 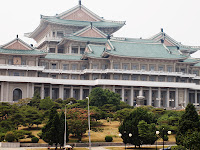 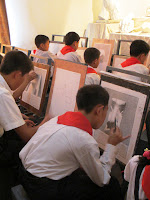 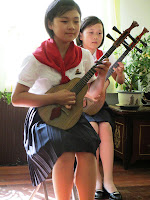 There were a number of School Children's Palaces in Pyongyang, but I'm pleased we visited this one, as the building was more fun.    We were hustled from class room to class room, spending a maximum of 5 minutes in each room, watching children study industriously, draw furiously, or play musical instruments frantically.  The grand finale was a performance by the children.   We weren't allowed to talk to the children, and they obviously weren't allowed to talk to us.   One of our group attempted to speak to a small boy practising his calligraphy, and he was nearly reduced to tears!   The Palaces are for children who show skill or expertise in a particular field, usually arts although we also saw martial arts being practised.    There were a lot more girls than boys - and our guide was interested when I told him that  research had highlighted that the traditional teaching methods favoured girls.
Posted by Sue at 01:33