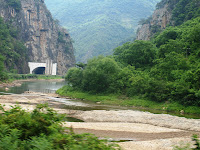 Up early again and heading out to Wonsan Harbour a port on the East Sea (also known as the Japan Sea) about 3 and a half hours of bad road from Pyongyang, but it definitely had its scenic moments. We had a stop on the way at the Ullim waterfalls, which was interesting because the falls were only discovered in 2001.   I think this was when the main highway was upgraded and some workers found the waterfall. Even though it seems odd in a country the size of North Korea that a substantial waterfall could be unknown.  Perhaps it is an indication of how accepting and unadventurous they are?

I found the whole area around the falls far too organised and neat, it was all concrete paths and bridges.   There were lots of soldiers around, so we had to be careful when taking photos.  And there was a building on the right that we weren't allowed to photograph.   Why would I be photographing this non-descript boring looking building anyway?  It's unlikely that it's some sort of mission control in the middle of no-where next to a tourist attraction?

One advantage of the long drive was that our guides kept us entertained by talking about Korean customs.   I've tried to cover most of these in my blog post on 'Everyday life for North Koreans'.  It was a struggle to get them off the subject of the war with the US Imperialists and sometimes making conversation was hard work.  Their lives just seemed so far removed from ours. 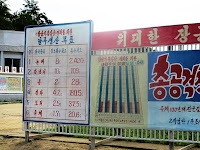 Next stop was the Chonsam Co-operative Farm.   Not the most prestigious farm in the DPRK, but one of the best.  This farm has 800 farmers and a total of 1700 residents.   Farmers are divided up into work teams, which is sub-divided again into smaller units, until the smallest grouping: teams of 10 to 15 farmers.  We asked whether young adults were still interested in being farmers, or did they prefer to move to the cities?  This was one of those questions that caused blank looks.  It appears that there is no choice.  Farmers are required and so people will be farmers whether they want to or not.   The photo is of a tally board, showing individual production levels, and also the production of other co-operatives. 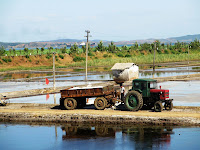 Farming is by the Juche method - the right crop, at the right time, on the right land.  There are only 2 million hectares of arable land in the DPRK, so they rely heavily on fertiliser and sowing double and triple crops.  The farming methods are fixed centrally and everyone is required to follow these set procedures. The field size was being standarised to assist mechanisation.  We saw tobacco spread out to dry and was told that they make their own cigars (for the men only, I'm sure!)

We stopped in at the Sungdowon Children's Summer Camp, but there were no children.  Or rather just one group who were about to leave for the train station.  We were shown a dormitory with four beds and two portraits of the Leaders!

And at the end of the day we were promised a special treat, a walk on the beach!  This was a big deal, not usually allowed.  We had already seen the beach from our hotel room.  It was really scenic with pine trees lining the board walk.  We could see people relaxing, chatting and generally enjoying themselves along the water front and on the pier.  We didn't make it onto the beach, only the board walk and without our cameras, but we had a pleasant stroll and felt like the Pied Piper as we were followed by locals and children, all staring at us, but most were too shy to make conversation.   The water was extremely clear, but we were told that it was quite cold.   The East sea has no tides and so no waves.

At one time this was a popular destination for Japanese tourists and we saw an old cruise ship still tied up in the harbour.  But the DPRK managed to upset their neighbour.  I read that Kim Jong Il apologised in 2002 for abducting 13 Japanese people.  Until then not everyone in Japan had believed in the tales of abductions.   Of course, this wasn't the reason for the disharmony given to us - all the blame was placed on the cunning, evil Japanese.  Surely they can't believe that everything is so one-sided!! 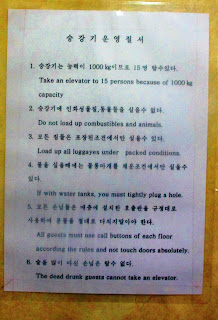 People remained on the beach and the pier until late at night, even though there were no street lights!


Our hotel was by far the best we stayed in during our whole trip - electrical plugs worked, there was hot water, lights worked, the bed was comfortable, it was clean, in fact it was just like heaven!!  And there was this most amusing sign in the elevator!