I was not looking forward to visiting the war museum.  I generally find them sad and depressing.  War seems so pointless and horrific, and I didn't think that the Victorious Fatherland Liberation War Museum was going to be any different.   It started with a long and involved explanation about who started the war, whose fault it was, etc, etc.   If you ask any two schoolboys in a school yard, who started the fight, the answer will always be: 'He did!'   We were told that the North Koreans had fought valiantly against enormous odds, and had defeated the whole of the US armed forces on their own (maybe with just a little help from the Chinese, but not much really).  Everyone has their own version of history - it's all just a different point of view depending on which side you are listening to.   The display of equipment was interesting.   The Korean equipment appeared to be Russian, left behind from the Second World War, and was all in very good condition.   The UN equipment was battle scarred and weary. 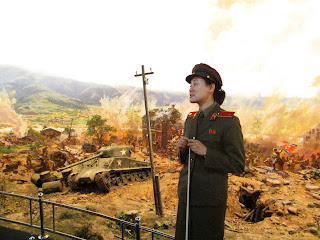 The highlight was the 360 degree panorama of battle scenes.   It is the biggest in the world (of course) and was created by 10 soldier artists in just 40 days.  It is 132m long, 15m high and the back wall is 1.3 m away.  It is difficult to tell where the models stop and the painting begins.  We rotated around in the middle  It was extremely well done and very effective.

There was also another display created by soldier artists, only this time the models moved.  It was all very exciting with North Korean women and children transporting weapons and bombs in the back of trucks in the dead of night whilst being attacked by the US imperialist enemy with search lights piercing the dark, and air raid sirens, etc.  Great theatre! 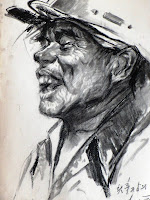 Then most appropriately we headed off to see the film studios.   They produce an average of 30 films a year and I think you would be hard pushed to recognise one from the other.   We walked amongst the permanent film sets, Japan in the 1950's, South Korean in the 1950's and 1960's, and a European house that was hard to place.

Next stop the Mansudae Art Studio.   It is most probably the largest art production centre in the world (are you surprised?) with over 1,000 artists.   We were disappointed that our visit was restricted to a couple of artists who specialised in landscapes.  Although I spotted this sketch on the wall that I really liked. 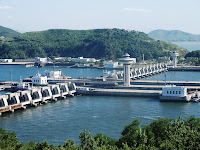 The Tower of the Juche Idea, another memorial to Kim Il Sung.   The view over the city was worth the ride in the tiny elevator, and then it was back in the bus for a drive out to the West Sea Barrage.   Another amazing feat completed by the North Koreans.   They started in May 1981 and finished in June 1986.   It was an incredible feat, although in those days they were still receiving Russian funding.  Anyway it was a good thing they did it, because they desperately need the water now for irrigation.  We weren't told how many people died during the construction, but Kim Il Sung visited the site a few times, usually when there was an insolvable problem, which he would promptly solve!

The only time we felt that we were being 'watched' was during our visit to an orphanage.   There were 190 children with 60 teachers and workers.   The children looked happy and healthy, and put on a little show for us.  I took photos and tried to show them their pictures, but they seemed to have no comprehension of what they looked like!   Other Korean children we had encountered knew exactly what a camera was, but these little guys had no idea!  And they were so adorable, I could have easily taken a couple home!!   It seemed that most of the parents had died in industrial accidents.  I wanted to suggest that perhaps Chollima had a bit to do with it, but didn't think that this view would be acceptable!

When they are six years old, they leave the orphanage for the revolutionary school (specifically for orphans) and live in dormitories.  Fostering and adoption doesn't seem to happen very often.  I was met with blank looks when I asked whether uncles and aunts were willing to look after the orphans.  Obviously it is difficult enough to bring up your own children, without taking on any extras!  The orphanage also had 3 lots of triplets.  The government welcomes triplets and they seem to be a source of national pride, but it is decided that parents can't cope with three at once.  So off to the orphanage they go, but they are allowed home at the weekends.

After our hot pot dinner, we visited the Kaeson Youth Park.   It had been visited by Kim Jung Un in May and as a result was extremely popular.  There were very long queues to get into the park.  Everything was so controlled.   People  queued in groups to get in, and you had to stay with your group for each ride.  We enjoyed special status as visitors, jumping every queue, but we decided it was a step too far when they started pulling people off the ride so that we could get on!!  We didn't want to start a riot!   It was enjoyable mixing with people who were out having a good time with their families.     When we left the park, fairly late in the evening, there were still long queues of people waiting to get in.