We survived the long drive back.  The road was long, bad and boring, but generally it was thought worth it.   We had seen a very different part of the DPRK.   Although we had been disappointed that the Children's Summer Camp was deserted, we had enjoyed the farm and the beach.  The waterfalls weren't that great, but provided a welcome break and a chance to stretch our legs. 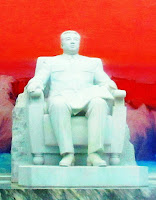 Back in Pyongyang we headed off to the Grand People's Study House.   Visitors are greeted by an enormous mosaic mural and an imposing statue of Kim Il Sung, looking rather like Abraham Lincoln.

This is a very impressive national library.  It opened in 1982 and is 100,000 square meters, with 600 rooms.  Anyone over the age of 17 is allowed in.  There are 30 million books, and yes, you guessed it, it's the largest in the world!  25 million of the books are stored and have to be requested.  We were told that these are the books published prior to 1990, but my guess it's mainly the foreign language books  (about 60% of the total books held).  They want to convert the hard copy books to electronic format, and there is a team of over 100 typists typing in the books. There is a team of 100 professors readily available to research answers to any questions you may have.  This is all part of the drive to make the DPRK a country of intellectuals and they estimate they already have 2 million! I wonder how that's measured?

The lecture halls are used mainly for re-training.   Courses are decided after consultation with the government and other organisations bearing in mind current government policies and objectives.  People can apply to attend any course and applicants are taken on a first come first served basis.  However, they have to apply for time off from their normal employment.  And there is always a waiting list.

The normal lending period for books is 20 to 30 days.  We asked whether students ever return books late and what is the penalty.  Our guide chuckled quietly and advised that the first time a student is late, his whole class is banned from the Study House for 1 to 2 months.   If there is more than one student who dares to misbehave so badly, then the whole college will be banned from the Study House.  I guess there's no need to impose fines then! 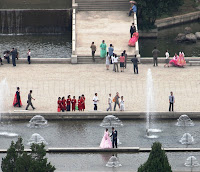 Our guide was the head of the Study House.  He had worked there for over 15 years. His first job had been in the army, which he left after 10 years to go to university, and then on completion of his studies, he started work at the Study House. He took us to a balcony right near the top of the Study House, so he could enjoy a cigarette, and we could enjoy the views.   I managed to get some good shots of bridal couples in the park below.

Next stop the middle school.   We were invited in to sit with students in their English class.  I sat with two fifteen year old girls and had a very stilted conversation for 15 minutes, running through the usual questions: what is your favourite subject, what is your favourite sport?  Do you have any brothers and sisters?  And they would ask me the same questions back again.   I think we were all relieved when it was time for us to go and watch the obligatory performance!

Then we really had a trip into the past!  Visiting a bowling alley. Apparently this is very popular with local Koreans.  It might have been the time of day, late afternoon, but the place was generally deserted with only a few people playing, and I think they were staff.  Anyway, we had fun, and it was a welcome change just to relax.  Until the power went off.   We waited about 30 minutes for it to come back on.  But when we got back to the hotel after dinner, the power was off there as well, and it didn't come back on for about an hour. We were trapped in the lobby with our suitcases! And our rooms were on the 7th floor!    It wasn't the best way to end our trip, but it was another demonstration that this holiday was definitely different!!