There was still no water in the morning.  But we had a long day ahead of us and much to do.  So after more wet wipes and another kimchi breakfast, we headed out. 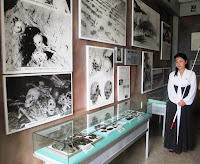 First stop was the museum dedicated to the Sinchon massacre.   We had to be early because today was the 100th anniversary of the birth of Kim Il Sung and there were many celebrations planned at the museum.  We needed to be in and out before they started.   There was no real evidence as to who committed the atrocities that are remembered here, but I don't think the fact that they occurred is disputed.

We had a group discussion later as I was interested in what the younger members of our group thought about the museum.  There was a general consensus that these museums are helpful in ensuring that the atrocities of war are not forgotten.  My own feeling of unease came from the fact that this museum didn't seem to be about a healing process, it was more about maintaining the rage. 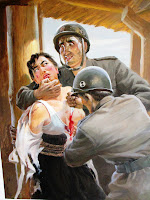 The statement below is representative what was told to us:

'The atrocities committed by the US imperialists in Korea far surpassed those committed by Hitler Nazis.  The US imperialist cutthroats resorted to the brutal methods of murder through long torments, sawing, burning and dismembering people.  No vicious human killers like Yankees are in the world.'

Again it is like it happened yesterday, or last week.   The amount of detail and the graphic images are designed to shock, and it had the desired effect, as there were many messages pledging revenge scrawled on the walls outside. 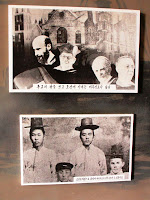 On a lighter note we were told that although Koreans are not anti-Christianity, they are against missionaries.  This is because most missionaries are American spies, sent to trick the people into the American way of life.  These missionaries/spies were very cunning and quickly learnt to disguise themselves as Koreans, as evidenced by the photo on display showing how 4 missionaries transformed themselves.  Luckily the Koreans were awake to their tricks and quickly expelled them!

It was explained to us later that there is freedom of religion on the DPRK.   It just so happens that the people have seen the evidence for themselves that the one true way is the Juche Ideology and so this is the path they choose.   We frequently asked for explanations of this Ideology and the short version was: Man is the master of his own destiny and for building his own fortune.  One is weak, but 20 million is strong.  The individual must work for the good of his community not for himself.
The fact that you might see contradictions between these statements is evidence that you don't fully understand the ideology!!

Anyway, soldiers started pouring into the museum grounds and the celebrations were about to start.  It was time for us to head off before we caused an international incident!!

We were off for a view of the non-existent wall between North and South Korea.  Apparently the US and South Korea are still firm in their belief that the wall doesn't exist.   Is it a wall?   I'm not sure.   The information given by the North Koreans is that the wall is 240 km long, 5 to 8 meters high, 3 to 7 meters wide at the top and 10 - 19 meters wide at the bottom and it is used to store weapons, bombs and land mines.  It slopes up from the south side, which is why it can't be seen, but drops away steeply on the northern side, rather like a ha-ha. 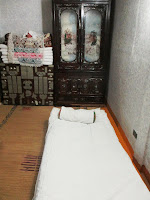 We spent the night in a traditional folk-lore village.   It was very pretty, but sleeping on the floor on a mat is not something one likes to do every night!   Luckily there was an excess of duvets, and by doubling them up and piling them on the floor, I managed to pass a reasonable night.  And there was water!