I was up bright and early as the curtains didn't block out any light, and I decided a stroll around the hotel before breakfast would be a good idea.  I could see a river nearby, and I am sure our guide said it was okay to walk in the hotel grounds.   There wasn't many people about this early, but as I started to walk into the car park, I felt as though everyone who was there was staring at me.  I remembered the story of the South Korean lady who was shot after rising early to watch the sunrise over the lake.   I hastily returned to the hotel lobby, and could almost feel the sense of relief from the hotel staff!  Breakfast was kimchi, with two fried eggs and two huge slabs of toast.   And instant coffee with creamer.  I never saw fresh milk during our stay.   My only 'decent' coffee, a cappuccino was made with UHT milk. 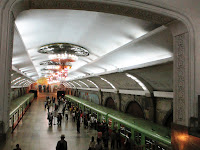 Our first stop was the MTR where we were allowed to travel for six stations, going much further than the normally allowed two (Puhung and Yongwang) stations at the end of the line.   This meant we travelled with ordinary Koreans going about their business on a Sunday and I can vouch for the fact that 400,000 people ride on that MTR every day.  In fact there were nearly 300,000 in our carriage, holding themselves very upright and breathing in, to avoid touching the foreigners.  We were jammed in as tight as any London rush hour! 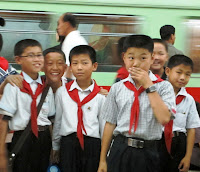 The lines are 110 meters underground.  And yes, you guessed it, they are the deepest in the world.   They  can be used as bomb shelters, and students like to study in the stations, as the temperature is regulated.  I couldn't quite work out where they would sit though.  The stations that we saw were highly decorated with chandeliers and large murals.  Whilst waiting for their train, people read the newspapers that were available on stands on the platforms.  There are four national papers, including those issued by the Youth League and the Workers Party of Korea. 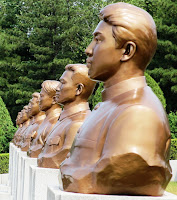 Next stop the Revolutionary Martyr's Cemetery - 150 revolutionaries are remembered here, each one with their own bronze bust with an uninterrupted view of Kim Il Sung's palace.  Each statute looks too perfect, an idealistic version of a hero.


The Japanese occupation of Korea ended in 1945, but it could have been only yesterday from the passion and fervour expressed by our guides.   Korean adults and children regularly visit this impressive memorial to commemorate their heroes, which is admirable, but there is a subtle undercurrent.  They are being taught that Japan's occupation of Korea should neither be forgiven nor forgotten. 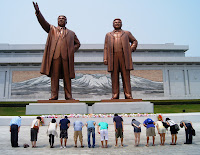 Mansudae Grand Monument, where the enormous statue to Kim Il Sung has now been joined by Kim Jong Il, both of them grinning from ear to ear.   All visitors are required to pay their respects by laying flowers and bowing before these enormous statues.   You can't help but wonder how such an impoverished country can afford these type of displays? 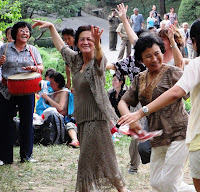 Then off to Moranbong Park to join Pyongyanites on their day off!  Sunday is the only day that they are released from their duties, and many of them head to the park for a picnic and relaxation with family and friends.   The most popular activity was dancing and the dancers welcomed us with open arms!  I got away with prancing around and twirling my arms, much to the amusement of watching Koreans!  Although they could speak reasonable English, they were very shy and reluctant to engage in conversation.

I would have liked to spend more time in the park, but we were off to see the only United States ship that is currently held captive.    The USS Pueblo is tied up at Taedong River next to a floating restaurant.  The Koreans are very proud of their trophy.  We were required to watch a 'documentary' before exploring the boat.   It's not a big boat and all the equipment and facilities look so dated now.   I found it hard to believe that 83 crew lived on board.  I did a bit of research on the USS Pueblo when I got back home.  Although the crew were treated badly by the Koreans, the way they were treated by the US Government/Armed Forces when they got back home was, in my opinion, much worse!!

When we got back to our hotel, there was no water at all.   We were hot and dusty from the days activities, so it was bad enough that I had to bathe with wet wipes, but not being able to flush the toilet was even worse.   It reminded me that despite the fact that it looked so neat, clean and organised, this still was a third world country.
Posted by Sue at 06:17