Are Cubans waiting for Fidel to die?  . 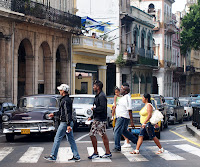 As part of the 99% who are increasingly disillusioned with capitalism and democracy,  I looked forward to revisiting Cuba.   In 2010 I spent just 4 days in Havana,  but  fell in love with the faded retrospective ambience.

Cubans had rejected consumerism and greed.   Everyone had food to eat and a roof over their heads.   Everyone was entitled to an education.  Everyone received health care in one of the best medical systems in the world.   They believed in equality.

Lack of material goods did not mean Cubans were poor.  Riches can be measured in so many different ways.

In the evenings the citizens of Havana spill out into the streets to talk, to dance, to make music and to create art.   There is little crime – why steal when everyone has the same stuff that you have?   Everyone knows their neighbors, not only the people next door, but the people in the next street, the people in the next town.    A society that enjoyed life to the full without excessive consumption.

But on my return trip in March 2013 I found so many changes.   There were beggars on street corners.  And grumblings of discontent. ‘This is a hard country,’  muttered one beggar.  Had it always been a hard country? And was it only now as Fidel fades away that he felt able to speak out?   Everyone was an entrepreneur trying to make some extra money.  Street vendors pushed harder for sales, and  I was warned against walking in the back streets in Havana on my own.    Things are changing fast.

‘We don’t want to change our culture or way of life’  I was told, ‘Just the economy.’   How can you change one part without affecting the rest?

‘The government pretends to pay us and we pretend to work’ I was told.   This is truer than ever before, now that the food rations have to be supplemented and the minimum wage isn’t sufficient.   The effort no longer goes into the Government day job, but into private enterprises.    Over half the population lives on remittances from relatives in Miami.

Farmers receive incentives to increase production.   The Government purchases 80% of their produce, and they are free to sell the remaining 20%.   Farmers are becoming wealthy and others are eyeing their largess with envy.   Policemen get paid more than doctors, but if you want proper treatment, you will need to bring the doctor a gift.   No one spoke about giving policeman gifts.

Houses can now be bought and sold, but very few people have the money to buy a house.  So instead, there is a market for house swapping.   Interested parties meet in the main street on Saturday mornings and hopefully find a suitable swap, which can involve a cash payment or other goods.

Fidel Castro tried to create Utopia.  Was he successful?  Would it have worked without Russian support? But now Cubans can't wait to move on.   There is a sense of a collective holding of breath, waiting for the government to change, for Cuba to open up and become a capitalist society, which Cubans optimistically think will solve all their problems!