Shrimps were still in the kitchen – I was so worried that they would make an appearance at dinner tonight.  At this stage, I was going freely into the kitchen when I needed something.   It was a standard rule that no volunteers were allowed in the kitchen and for good reason.   They might notice the unhygienic conditions, like the dogs wandering in and out, no fly screen on the back door which had to be kept open because of the heat, food left uncovered, dirty plates left for hours, the lack of hot water.   But to be fair, I didn’t get sick the whole time I was there. 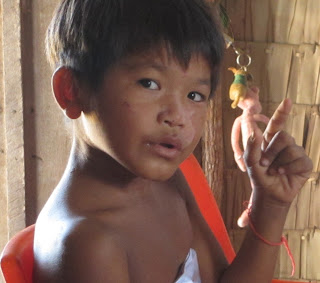 Back to school and alphabet revision again!!  The morning kids were keen and worked hard, but the afternoon group was already tired from school, and not so keen.  I was tired and gave up.  I should have let them do some colouring-in etc, but I was exhausted and let them go home early.   I felt guilty later.   I looked back to my first day when I thought that the 2 hour lunch break was too long.  Now I just collapsing and enjoying the respite! 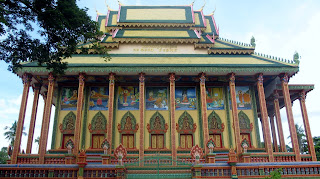 We decided to investigate the Buddhist pagoda on the way home.  We had driven past it every day, but no-one had been inside.   It always looked deserted, and it was!   I wandered around and finally found someone and asked if we could go in.   After much sign language and waving, someone finally arrived with a key, opened the door and let us in.  The walls were very brightly painted with Buddhist scenes.  And there were two boys inside working in the dark!    Unfortunately it was quite dark, and no-one could explain the paintings, but still it was an experience.   We walked over to the school next door and caused total disruption.   Some of our children saw us and came out to say hello, and that meant other children came out of class as well!  We decided to beat a hasty retreat.

Pork curry for dinner – saved from the shrimps!   The dinners were always tasty – Lom was a good cook.    We learnt over dinner that three doctors were arriving next week to do an assessment of the village children.  It was going to be a very busy week.
Posted by Sue at 04:08