I love working with children and I love travel.   So what better way that to satisfy both these desires than by volunteering in a country I had not visited?  I've previously posted an article giving an overview of my experience, but what follows is my daily journal. 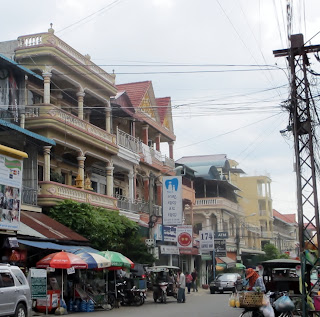 I travelled by bus from Phom Penh to Siem Reap, and despite many text messages confirming arrangements, I had to wait for over an hour to be collected.  Luckily I was the only person waiting conspicuously as they had forgotten my name when they finally turned up!  But I immediately forgave all as they were 3 lovely bright bubbly girls: Tracy, Elaine and Sally, about 21 to 24 years old in a tuk-tuk driven by Ravy, our local interpreter and driver. 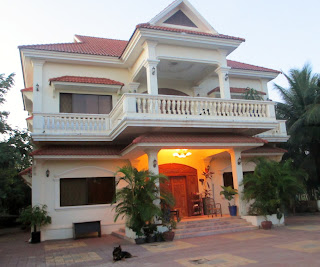 Back at the villa there was one more young girl - who appeared to spend most of her time sleeping!   I had expected some older people.  Was that my prejudices showing?   But it was explained that the CEO, Phil, was in Cambodia, but had relocated himself to the other side of the country.  He was in the midst of a marital and health crisis.   Claire, his wife, was still hoping for a reconciliation,  but making valiant attempts to re-build her life and distance herself from the project.   Sally, their only child, is also trying to distance herself from this mess and was about to head off to India for 3 months with the friend who sleeps all the time!

This left a large leadership void - intended to be filled by Tracy.  But as I discovered Phil and Claire were reluctant to give any real kind of authority to Tracy, after all, this was their livelihood.    With the benefit of hindsight, it was a recipe for disaster,  but luckily I didn’t realize all of this immediately.   That first night was spent listening and sympathizing with Claire, as we drank my bottle of wine.
Posted by Sue at 02:29