My neighbours wake up early to start their daily tasks before it gets too hot.   The noise of cooking and sweeping, and preparing for the day, means that I am also awake at 5.30am.   My room is on the corner of the house, with windows on two sides.   With the windows open and the fan on, the heat is bearable.  There is no hot water, but so far this isn’t a problem. 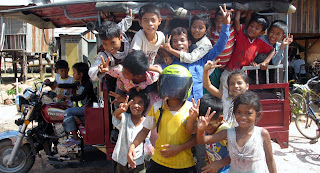 Breakfast is fresh fruit, cornflakes, bread or toast, and tea or coffee.    We collect our lunches and head off to meet the children.   We stop on the way for US$2 petrol and pick up bottles of water.
The children were ready and waiting for us as we arrived in the tuk-tuk, and climb on board as we slow down for the corner.  I’m pleased that the children remember me from Friday.


I try my hand at being ‘teacher’, and write the alphabet on the whiteboard in alternate colours, red and blue.   I’d rub a letter out and choose a child to come up, select the correct colour and fill in the missing letter.  They love to write in their exercise books, but I was worried to see that some were using books that obviously weren’t theirs.  Some didn’t bring books, and were given sheets of paper, reluctantly.   I didn’t understand this parsimony.  Exercise books are so cheap, and the children obviously treasured them. 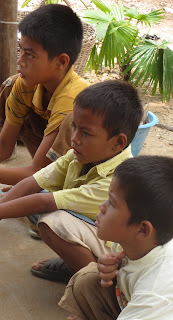 During lunch time – a 2 hour break – we talked about the fact that as the population is so young there are not many grandparents to look after children.  No-one mentioned the fact that most of the grandparents had been killed.   I asked about land ownership and was told that only Cambodians can buy land, but a foreigner can buy airspace.  It took a few more questions before I realized that this meant foreigners can buy apartments.

The marble gang came to the care center that afternoon.  Marbles is a deadly serious game.   I found a marble but I wasn’t allowed to play.   Boys only and not all boys, only those belonging to the Cool Gang.   I haven’t quite worked out all the membership requirements but owning marbles definitely helps.   Wearing a shirt doesn’t help, and your pyjama bottoms should be very loose and nearly falling of your behind.   Surprisingly, skipping doesn’t detract from your coolness even when your pyjama bottoms fall off!
I was a bit concerned that the marble gang would disrupt the class, but no, they were as keen to learn as any of the other children. 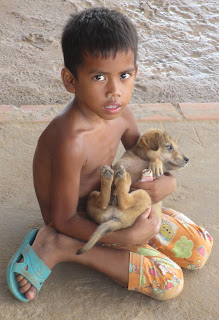 There are about 5 puppies that live next door.  They are very cute with short pale coloured hair, but have fleas and all sorts of mangy bits.   I was offered a puppy to cuddle, and although it did look very cute, I just couldn’t bring myself to hold it.  The children obviously have fleas, as some of the older girls groom the hair of the younger ones, and I had no problem hugging or cuddling them.   But the puppies were a step too far for me! The kids love the puppies and play with them a lot, sometimes quite roughly.   But I get the feeling that they aren’t really regarded as pets.  There are a lot of dogs wandering around, usually busy mating, and I am sure that dog meat is a staple food.
Posted by Sue at 02:53