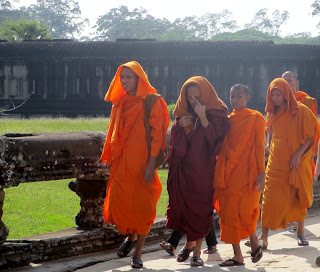 We had planned to go into town and explore.   But it seemed that everyone had hangovers and there was a drama with the cat.  Poor thing had a large horrible boil or an ulcer, and we required a vet.  Sally was in charge of all the animals at the villa, which consisted of two badly behaved dogs and one cat.    The vet finally arrived on a scooter, along with the cutest little boy, who was too interested in the proceedings.   So I ended up entertaining him, so that mum could get on with the job.  It was very traumatic with the cat yowling.

The others were too exhausted after all that stress, but I couldn’t afford to waste time, so decided to head off on my own.  We hadn’t booked the tuk-tuk so, the next door neighbor offered me a lift on the back of his motor-bike.  I didn’t need to say that I hadn’t been on the back of a bike for too many years to mention, one look at my face was enough.  Luckily for me Simorn drove rather sedately into town and dropped me off at Pub Street.  I wandered around but was rather disappointed with Siem Reap.  It seemed to be just another dirty, run-down Asian city.

Simorn came back with the tuk-tuk and took me off to visit the Angkor National Museum.  Well worth a visit to try and understand the history of the area, but far too much to take in!  And I thought I had seen enough Buddha statutes to last me a life time.  I felt completely overloaded!  But I do recommend it.  I now wish that I had returned after my visit to Angkor.

This photo shows a man taking two pigs to market.  They were both alive!

Back home in time for dinner.   I’m not keen on eating out on my own, but also had to ensure that I got my monies worth back at the villa.   After all it’s fairly expensive accommodation!

The evening was spent listening to Sally.   She was the heroine of so many adventures!  The reality was that she had been dragged from pillar to post by her parents as they tried to make their way in South Africa, Malta and now Cambodia.   She hadn’t been able to finish her schooling and was worried about what would become of her.   Her life had always been rather precarious, and to top it off her parents were separating.  My feelings towards Sally kept veering between irritation and sympathy.   She could be such a know-it-all and very negative about any suggestions, then the mask would slip and you could see a little girl lost and confused.  I wish her well.  She's a bright and caring girl who deserves more.
Posted by Sue at 02:38