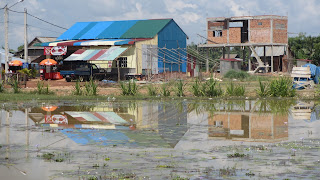 We were located on the outskirts of Siem Reap and involved in a nearby newly established village.    The inhabitants had been evicted approximately 6 months earlier from the banks of the Mekong River.  There was surprising little about it on the internet,  but I found this site for those who want to know more: http://www.travelfish.org/blogs/cambodia/2012/04/01/siem-reaps-north-riverside-evictions/
The village wasn't as picturesque as my photo makes it appear.  Close up the pond is full of rubbish, and the village is barren without a tree in sight.

I was assured that I didn’t need to do anything on my first day, just observe and get the hang of it.   The classroom was a little hut on stilts, that had been built by previous volunteers.  The floor was fragile, I had definitely seen stronger floorboards before.  In fact there was one large hole, usually covered by a chair, to try and prevent anyone falling through.   The classroom had a front door and a back door.   The front door had steps going up to it, and the back door opened onto the vegetable garden, but there were no steps, just a drop of over a metre.  The doors were the main source of ventilation.   The problem was that the afternoon sun poured in through the back door.  One of the best things was the newly finished concrete patio.  It was so good for games! 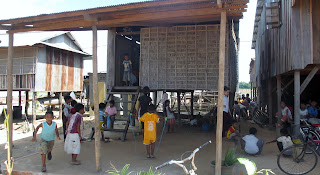 On that first day we had about 20 children in the morning, and 15 in the afternoon. Two children stayed for both sessions which was a problem because they should have been in school.   At this early stage, I thought the youngest was about 18 months old, but I subsequently learnt that she was at least 4 years.  It took me a while to adjust to the different levels of nutrition and development.

I was immediately impressed at how well the older children looked after the smaller ones.   There were very few arguments.   Those that did take place were short and sharp, and then life went on.    These children have so few toys that there was no such thing as boys’ toys and girls’ toys.  Everyone played with everything that came their way.   The boys loved to skip even more than the girls.  But marbles was the exception.

I noticed that only boys played marbles.

I found that I couldn’t stand and observe.  Elaine was doing most of the teaching, whilst the others chatted amongst themselves.   It is impossible for one person to cope with 20 children, so I quickly found that I was sharpening pencils, and guiding little hands to write on their exercise books.

It was hot, and very dusty, and the children required a lot of energy, and I just loved being with them!