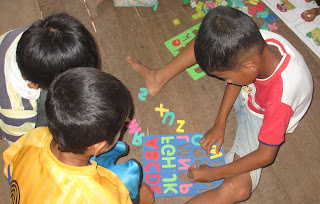 Today was my last day at the classroom.    I did days of the week again, but by now that Addams Family tune was driving me nuts!   I couldn’t get it out of my head.  The children love it but really only remember the first line.   I’d found some good ideas encouraging the children to participate which included getting them to write on the board.   We started on learning the words for body parts. 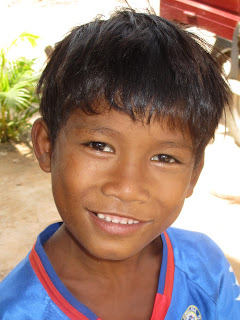 During lunch time, I decided to encourage two of the smaller children write on the board.  It was funny at first, the way they imitated the older children by trying to write the alphabet.   Then it wasn’t so funny as they started squabbling over the markers, and it turned into a real fight!   I pulled them apart, managed to get a wriggling, yelling child under each arm, and then dragged them over to the steps.   Luckily two mothers came to my rescue!   One child had a blood nose and I’m sure the other lost chunks of hair!  There was much clucking and sounds of disapproval from the mothers, and I felt really guilty.

The afternoon class was slow and long.   The children didn’t want to wear their name tags, and had lost interest in th
e games.   I managed to do a few things, but it was hard work.   It must have been a tough morning in real school, and they were tired.

Finally it came time to say goodbye to everyone.   Parting from the children was difficult, I hated saying goodbye.

In the shortest of times, I had come to know them and to be so fond of them. Angry Birds who would get upset so quickly, but equally was so affectionate.  Grumpy One who blamed everyone else for everything that went wrong.  I didn’t need to understand what he was saying to know what he meant!  Baggy Pants, left-handed and most probably dyslexic, who wrote laboriously, but was very deft at marbles.   Big Boy, who refused to go to Real School perhaps because he was bullied there?   Angel Face, with her winter pyjamas always tightly buttoned, who wanted everything neat and clean and just so.   TomBoy, so unco-ordinated that she would skip wildly, arms and legs going everywhere, and never get past the count of three!

I was still feeling sad hours later as the plane left Siem Reap.  I had a last beautiful view, looking down on that amazing lake, a small fishing village and the setting sun. 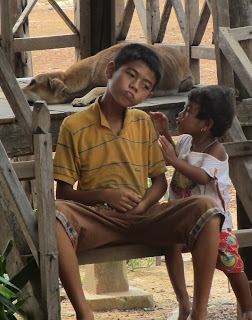