Not a good start.  When we got up in the morning, there was no breakfast.   Well, there was dry cornflakes, but no milk, no bread and no water.  Apparently we had eaten our bread allowance as afternoon snacks!   Luckily I had some rations.   Everyone blamed everyone else.   I was very unhappy.  Surely it was not that hard to organize the food!   Apparently we were supposed to use our initiative and organize it ourselves.   This must mean Elaine and I as we are the only Indians in a place full of chiefs.

Then we found that our classroom had been invaded by red ants.  Elaine and I started sweeping vigorously.  But the more we swept, the more ants there were.  Finally I went downstairs to have a look – they were climbing up from a nest in the ground next to one of the supports. They seemed to have come with the rain!  Luckily the village chief (a real one for a change) who lived next door, gave us a rag soaked in turpentine, which he wrapped around the post.   And poured more turps into the ant nest. 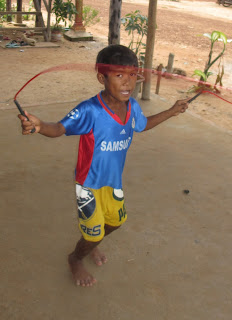 Finally we were ready to start teaching.   We had a very full class in the morning.  We hope that the word was spreading about our efforts.  We went over the alphabet again and again.  We sang it, we shouted it, and then we broke it into sections and did actions in between each section.  We had alphabet charts on the wall with ‘i for ice’ and ‘s for snowman’.  It seemed so inappropriate.  Did these kids even know what snow was, let alone a snowman?

Tracy had prepared sheets of paper with alphabet characters and words for the children to trace over.   They would draw the words, rather than write them, moving the paper around and using a ruler for all the straight lines.

I had made paper airplanes the previous day with some of the boys, which were a huge success.  Today the little boy in shiny red pyjamas, which he wore most days, wanted one of my sleek jet-streamed airplanes, but unfortunately I didn’t know what he wanted.   We both got pretty frustrated!  It was so difficult to communicate.   The children managed better than I did by waving a finger at me, and saying ‘t-CHER No!’  or giving me a big smile and ‘t-CHER yes’ when I got it right! 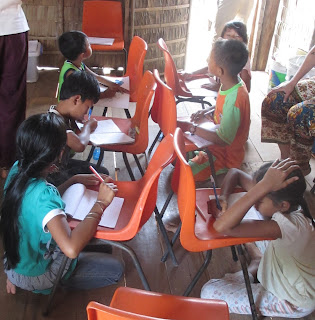 I was getting to know the children and recognizing their different personalities.  I found their names difficult to remember, and gave some of them nicknames, like Angry Birds, Bruce (who thought he was Bruce Lee), Red Pyjamas, Little Miss Toughie.

I continue to be amazed at how keen they are to learn.   Even the Cool Marble Gang sit quietly in class and write laboriously in their exercise books, in between kicking the kid in front, or quickly borrowing an eraser when no-one was looking.  We had very little furniture and chairs had to double as desks.

The children were at different levels and different ages.  So it was difficult to keep them occupied constructively.  Some children took much longer to finish an exercise than others.  Those that finish quickly get bored and noisy, but can’t be allowed to interrupt those still struggling on or they will take even longer.   And don’t think those still going will give up!   No, even the slowest one keeps plodding on whilst chaos breaks out all around.   They only get upset if someone blocks their view of the board.  I’ve tried to help some by guiding their hands – very difficult with left-handed children as I am right-handed.  Some let me help, but then start over again on their own! 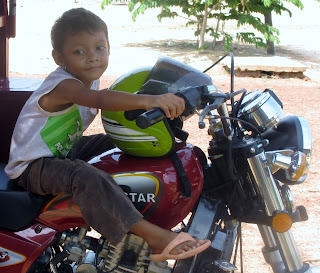 The children are getting less inhibited and I get more hugs and cuddles every day.   Angry Birds was reduced to tears today and I sat down on his chair and pulled him onto my lap for a big cuddle.  Some children were laughing, but he didn’t care, he loved it.

Little Miss Toughie wore a woolen Christmas
hat to school today!  In 36 degree heat!  Most children wear western pyjamas, often flannelette or shiny polyester.  Both look unbearably hot to me, but I found it hard to keep a straight face when a Mum and her two children turned up all wearing matching winter pyjamas!
Posted by Sue at 03:01