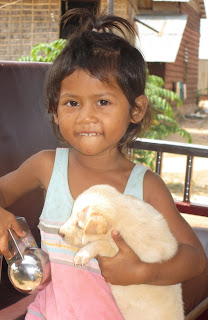 It was Ravy’s birthday, our driver and interpreter.   We sang the happy birthday song at every opportunity. The children loved it, and so did Ravy.  He pretended he was too cool for all this nonsense, but found it hard to keep the smile off his face.

It was sewing day today,  so Claire and Sally accompanied us to school.  We did the alphabet again!  Even I am getting tired of the alphabet, but it is difficult to know what else to do, as they are all at such different levels.  I have searched on the internet, but most games seem to assume a basic level of equipment such as a solid floor, or resources, such as flash cards.

I have re-written all the name tags.  And now each one has a name tag that I can read.   I also bought some exercise books, so each child could have their own book.  I was told that the children would take advantage if books were freely available and wouldn’t look after them.   I found this difficult to understand or believe, and I decided to use my initiative to buy books. 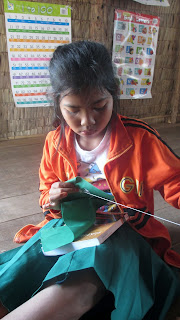 Sewing lessons took over the classroom in the afternoon.   One girl had finished the project, a little bag, and proudly displayed it to all her friends.  This meant that all the girls now wanted to learn to sew, and there just wasn’t enough teachers, or needles!  Claire and I struggled to re-thread needles, untie knots, and give assistance.   The boys and girls not involved in sewing wanted to play with the games in the classroom, as they had done on previous days.  But suddenly they couldn’t.   More stress for Claire and I!   I gave airplane-making lessons to try and divert them.  But that meant I wasn’t helping with the sewing!   It was chaotic. 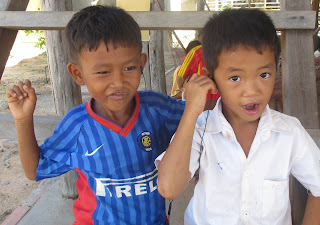 Tracy must have felt the need to take control of the situation and impose some discipline, because she suddenly announced that tomorrow would be a test day.  She gave the children a lecture about how important it was for them to learn so they could get good jobs and look after their families.  Luckily most of them couldn't understand a word she was saying.
Posted by Sue at 03:03