I was really worried about what was going to happen on test day.   So far Elaine and I had done nearly all the teaching and we improvised as we went along.   I looked for ideas on the internet in the evening, and we would try it out the next day.  So it had been extremely haphazard.   I didn’t want to give a test to these children.  It smacked too much of real school and we weren’t a school.   We couldn’t force the children to come.   We needed them to want to come.  And I didn’t want any of them to think they had failed.  They all tried so hard.  If we provided the children with a vision of a different life, of something to dream for, then I thought we had achieved something.  We didn’t need tests. 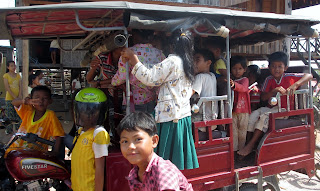 For the first time I went to school with a feeling of dread.   The children were waiting for us as usual, but so many children!  There were children everywhere.  Children we had never seen before.

What Tracy hadn’t know was that she had chosen the worst possible day to hold the test, a school holiday!  It was going to be worse than even I had imagined.   Tracy selected which children would do the test in the morning and who would sit the test in the afternoon.   All those children not included in the test would remain outside.    Easier said than done as all the children outside wanted to see what was happening inside.   It was really unfortunate that we hadn’t known about the holiday.  A wasted opportunity when we could have made our classroom look inviting and fun to those children who hadn’t been before.  Instead we locked them out and chased them away! 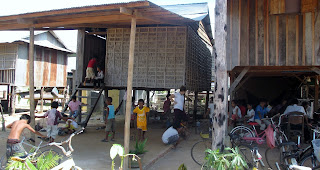 We had to protect the children writing the test to give them a fair chance.  Ravy locked the front door, but he couldn’t lock the back door because they needed the ventilation.  So boys climbed into the vegetable garden and swarmed up the posts.  I was outside on my own, and found it impossible to control the children.  There were about 40 children running everywhere.  Tracy, Ravy and Elaine were inside holding the test, and then marking papers.  I was pleased I wasn’t inside, but boy, it was tough going outside.  I tried to get some games going, but it was impossible.   I had to spend my time pulling kids off the steps and out of the vegetable garden.   What a nightmare!

Tracy had originally decided that only those children with full marks were going to get a prize.  There were children who had tried really hard, but whose learning

wasn’t at the same level as others.  They just didn’t know enough to get full marks but had made an enormous effort.  Tracy quickly realised that her plan could backfire, so she gave out prizes for effort as well as achievement.   But that meant there weren’t any prizes left for the afternoon test!

Lunch-time was spent improvising and trying to make more prizes.   It was at this stage that I discovered many hidden treasures in the classroom boxes!  If only I’d known earlier! 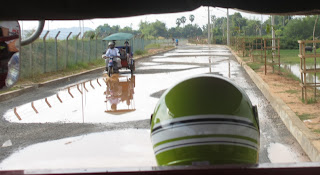 To end a nightmare day, Elaine lost her camera on the way home.   We drove back and forth, and even walked along the road trying to search every puddle, but couldn’t find it.  Poor Elaine was devastated.
This is a picture of the road we travelled on each day, so you can see how difficult it was to find the phone once it had fallen out the tuk-tuk!


Everyone went out that night to celebrate Ravy’s birthday  and to farewell Sally who was off to India the next day, with the sleepy friend who had emerged about 3 times in total from her bed!  A few wines took the edge off an exhausting day.
Posted by Sue at 03:06