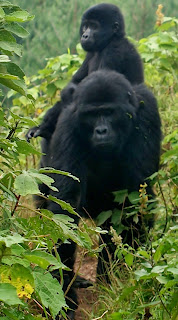 My most memorable moment should be when I connected with a mother gorilla.   She was within touching distance, clasping her baby to her chest and our eyes met over its little head.   It was one of those life-changing moments communicating silently with this gentle beast.   Instead the bit that sticks in my mind was the ‘tourist from hell’ pushing past everyone, waving her ipad in one hand and yelling, ‘I have to get a photo! It’s my birthday!’

But she also gave me one of my funniest memories.   I can still picture our guide’s face when, concerned the gorillas weren’t co-operating with her birthday plans, she offered to retrieve two apples from her backpack to entice the gorillas out of the undergrowth!

Thank goodness there are strict rules to protect this endangered species from humans.  Contact with the gorillas is limited to an hour.  Tourists are not allowed to advance more than 7 meters towards the gorillas, but this does not stop the gorillas advancing on us! 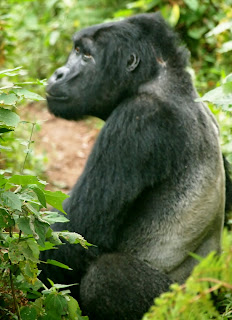 We were grouped together on a narrow pathway watching 4 gorillas when a large male seemed to be interested in us and ambled over to take a closer look.  We scrambled around, but there was nowhere to go, the undergrowth was too dense, and more gorillas were blocking our retreat further down the path.    Following instructions, we crouched down and tried to avoid eye contact.  The guides made soothing growling noises deep in their throats.  The silverback laid a hand on the arm of one trekker, leaned on the thigh of another reaching past her head to grab what was obviously the most desirable fern leaf in the national park.   Prize in hand, he went back to his original 7 meter position, while we tried to get our heart beats back to normal and congratulated each other on not giving way to hysteria!   But I wondered:  was he entertaining himself at our expense? 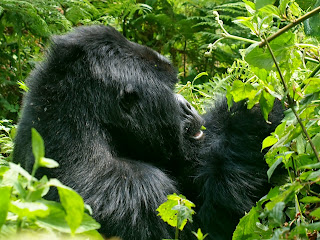 We trekked in two different national parks: Volcanoes NP in Rwanda and Bwindi Impenetrable NP in Uganda.  The two parks are close geographically, but humans have to drive a circuitous route and endure a border crossing (with wondrous African bureaucracy) to get from one to the other.   This is a mountainous region: covered with dense forests intermingled with more open areas packed with ferns.   The ferns grow closely together and so high that a gorilla can easily hide under them.   The black fur of the youngsters and the grey of mature silverbacks just disappears, and only the moving fern leaves gives them away. 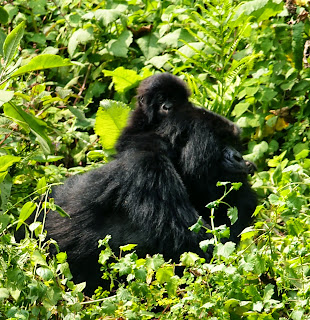 Even though gorillas live in family groups, they spread out over a wide area foraging for food.   Females can put away 18 kilos of vegetation and a male almost double that a day!   So opportunities to see them interacting as a group were limited.   I would have liked to sit a while and watch the gorillas socialize.   Instead we spent our time chasing individuals as they moved in search of food.

The two treks were quite different.   Most of the trek in the Volcanoes NP was under forest trees, whereas in Bwindi Impenetrable NP we were pushing our way through thick ferns.   Each habituated gorilla family has trackers assigned to them, so their location is always known, but the guides build suspense by pretending this isn’t the case.   A habituated gorilla family has been gradually introduced to humans and is more accepting of paparazzi than most celebrities. 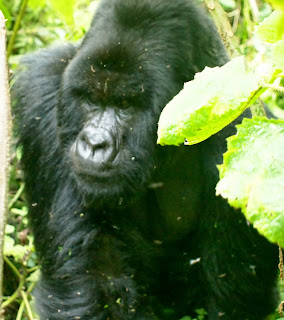 In Rwanda, our assigned gorilla family, the Amahoro, were scattered over both sides of a deep ravine, but mainly on the wrong side, of course.   We enjoyed the antics of 3 youngsters from a distance, until our guides decided it was time to get closer.   We had to slide down the steep hillside, clutching at stinging nettles, and clambered up the other side using vines as ropes.   I felt like an apprentice Tarzan, but it was well worth the effort.   I don’t know how many of the family of 19 we saw, but I reckon it was nearly all.

You can distinguish different gorillas by their nose shapes, but despite having hundreds of photos to study, I still haven’t managed to get the hang of it!
Posted by Sue at 22:23